Filter Scripts
Menu
Extensibility Solutions
Developer Documentation
You must be a MyPeek member to download our extensibility solutions. Click here to learn more about the benefits of membership and find out how to sign up for free.

You must have a valid maintenance contract to download this file.

If you are not a LiveAction Maintenance Customer but would like to purchase a Maintenance contract for your LiveAction product please click here for sales information.

Rating : Not Yet Rated 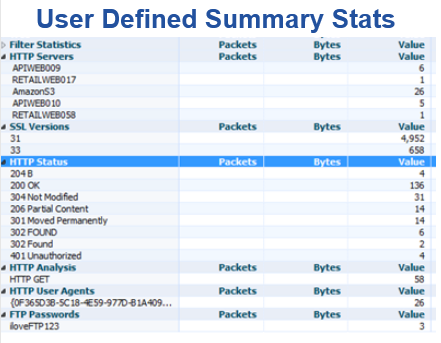 So how does it work? There are two parts to it. The first part is very simple, or at least familiar, since it is a feature we are all already used to: creating a filter. Just create an advanced filter with all of the filter nodes necessary to filter a particular type of packet.  The filter could be for HTTP Response Code Packets, DNS Error Packet, SSL Version Packets, or virtually any other type of packet you can think of that has something your want to count or alert on.

The next step is to specify what the action should be if the filter is matched. This is easy as well since it is just another type of filter node. The filter node type is called the FilterEventPlugin, and it is one of the options available in the Analysis Module Filter Node list.  By adding this node to the end of your filter node chain, you can now specify the action to be taken when a packet matches the preceding filter nodes.

Now comes the fun part, which is specifying the actions, and the various options for the actions. The action options are specified in the Comment field of the filter, along with the static text that will be used in the label or title of the action, which is to either generate an event and/or a summary stat.

Alright, enough with the description, let’s see what it all looks like. Below is a list of Filter Scripts in a filter folder called “Action Filters”.  As the list of filters grows, there can be many different folders with many different types of filter scripts. 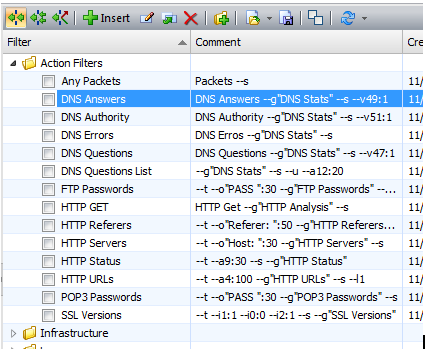 Let’s open one up.

This Filter Script is called “DNS Questions”.  The filter node is simple, just test for DNS.  The next filter node is the FilterEventPlugin node, which in this case says to perform an action. 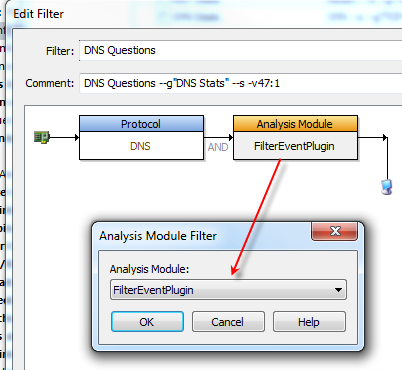 The action is specified as text in the Comment field.  First is the static text of our action which is “DNS Questions”.  In this case we have specified a –s, which means to generate a summary stat, we also use  --g”DNS Stats” to specify the summary stat group to put it into.  The next option is very cool.  It is the –v, which says to extract 1 byte from offset 47 and use it to increment the value of the summary stat.

Here is the result:

Do you see what we just did?  We not only created a Summary Stat, but once it is there, then subsequent packets cause it to increment, either by 1, or by some value extracted from the packet.

And to go just a bit deeper, here is an example of a DNS packet showing the number of questions at offset 46 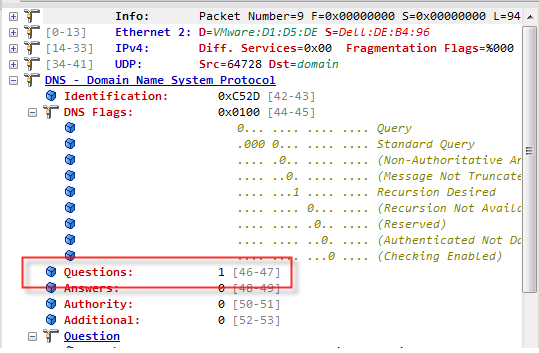 Here is a list of the  Filter Script options:

--t (if TCP, adjust “0-point” for offsets to tcppayload start instead of packet start)

--u (if UDP, adjust “0-point” for offsets to tcppayload start instead of packet start)

On Windows, the files go here:

On Linux, they go here

If you come up with any cool Filter Scripts, please tell us about them here!
Posted by: Chris Bloom on Thursday, January 28th, 2016 at 11:49 AM